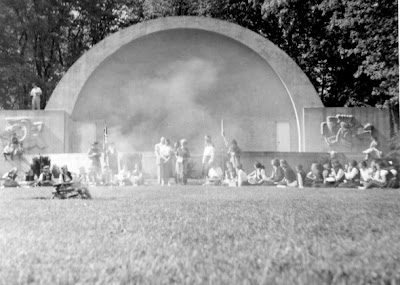 Camp fires are the other time camps sing. Some have evenings set aside for songs, recitations and skits around a fire. They may be sentimental or humorous in mood, or some combination.

Kitanniwa had two fire programs built into its schedule. One was the weekly cookout on the cook’s day off. It was seen as a pragmatic activity, with an expectation groups returned their dirty pots to the kitchen before dark. There was no relaxed period for singing.

Every Friday, the Camp Fire Girls camp held a council fire. These were formal programs, with planned songs taken from a conventional list. Many were organization. Some were sentimental or embodied the camp spirit.

Some times, when the schedule or mood allowed, the after supper sing would be extended and took on the contours of a camp fire. The songs then were slow or pretty, but could expand to include songs like "Home on the Range."

The only time I remember informally singing around a fire was on an overnight. I had been on several overnights before, which like the weekly cookouts, were too practical to allow for singing. But, one, when we were adolescents did conclude the evening with singing slow songs.

Pictures of cook outs appear elsewhere on this page. The 1958 council fire is the city-wide one held in Albion, Michigan, in front of the band shell in Victory Park. The photographs of Friendly Acres posted 4/11/13 look like a ceremonial camp fire.
Posted by Patricia Averill at 6:39 AM

Email ThisBlogThis!Share to TwitterShare to FacebookShare to Pinterest
Labels: Uses