In camps where people spend an entire summer, color wars are important sources for new songs. Camps divide into groups, usually tribes, and compete for various awards. In many, each group is expected to write pep songs, alma maters, and other camp-specific songs.

In many camps, the idea of dividing into groups has been adopted, with as many of the activities as will fit into a single week or day. I remember one camp where the tribes competed for the cleanest cabin trophy. 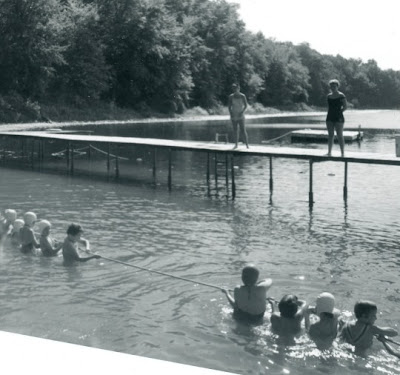 Kitanniwa only divided for specific events. Counselor hunts, which were essentially treasure hunts, were called color wars by some campers who brought the term from home. On July Fourth the camp held water games which ended with a tug-of-war for those who hadn’t yet learned to swim. We were not expected to write any songs, only invent team cheers borrowed from high school or college football traditions.

Skits were a more important tradition. Not only were there skit nights some weeks that required each cabin to mount a short production, but counselors staged short skits to announce evening activities. 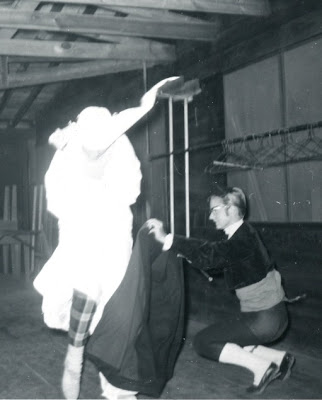 Only one person showed any interest in writing parodies and that was the camp nurse. During the winters, she was involved with a community theater group. Everything I remember she did was incorporated into a skit or pantomime.

What did your camp do? The top picture is from the waterfront games of 1958. The middle picture is a typical short skit, this one part of a 1959 Spanish night. The camp nurse is at the right telling fortunes during the same Spanish night.
Posted by Patricia Averill at 2:41 AM